The Metamorphic Studies Group is pleased to announce the winner of the inaugural Barrow Award, 2020, to 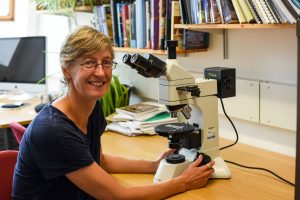 The Metamorphic Studies Group committee introduces a new award, named after George Barrow (1853-1932), geologist with the Geological Survey of Great Britain and the first to assign index minerals to zones of progressive metamorphism, Barrow Zones.

“The Barrow Award is awarded annually to a scientist who has made an outstanding contribution to metamorphic studies. Publications, teaching, outreach and other activities leading to the promotion of metamorphic geology, in the broadest sense, are taken into account in making the award.

Clare is an outstanding scientist who has demonstrated consistent excellence in and commitment to not only doing first-rate research in metamorphic geology, but in inspiring others to do the same through personal example and constructive engagement in her own community and beyond. She is someone who creates opportunities for herself, her students, and the geological community at large. In short, she is an ideal awardee for the MSG Barrow Award.

Dr. Clare Warren is a Senior Lecturer at The Open University, UK, where she has been based since 2011 as a NERC Postdoctoral and Advanced Postdoctoral Fellow, Senior Research Fellow, and Senior Lecturer. Clare completed her undergraduate studies and PhD entitled ‘Subduction of the Arabian continental margin beneath the Semail Ophiolite, Oman: insights from U-Pb geochronology and metamorphic modelling’ at the University of Oxford. Subsequently, Clare was a Killam Fellow at Dalhousie University, Canada.

Clare’s contribution to metamorphic petrology is that of a multi-method and multi-scale thinker and versatile researcher. She has made significant contributions to more than one topic in metamorphic petrology from mineral scale processes (Ar diffusion) to large-scale tectonics (exhumation of UHP rocks or evolution of the Himalayas). She has challenged existing paradigms and made a significant indent in “established” methodologies showing, for example, that other mechanisms have to be considered when interrogating Ar-Ar data.  Similarly, her work on UHP exhumation has proposed potential mechanisms that do not rely on the usual suspects (e.g. slab break off).

Her profile represents that of a modern petrologist, who can work with multiple tools and strategies including textures, isotopes, numerical modeling, field work, geochronology, tectonics and geodynamics. This breath of expertise is rare and she manages this exceptionally well. She is a well-recognised Earth Scientist within and across fields and a great role model for the whole community.

Clare is an energetic and effective ambassador for Earth Science in general and metamorphic geology in particular. Clare is a terrific catalyst – someone who will plunge in and organise seminars, workshops, field trips, and weekly tennis games as appropriate.

Clare is dedicated to serve the science community through organisation of groups, workshops and conferences, and as an editor. Her contribution to the Metamorphic Studies Group goes well beyond the call of duty and service, where she has served for over 10 years on the committee including as secretary and treasurer. Her educational achievements and high standards are reflected in the award of the Senior Fellowship of the Higher Education Academy. Through service and education, she has touched and improved the science experience of many colleagues, both junior and senior.

The Barrow Award 2020 was judged by: Daniela Rubatto, Bernado Cesare, Bruce Yardley, Matthias Konrad-Schmolke and Nick Rogers. Clare was nominated for the award by Ralf Halama and her application was supported by Rebecca Jamieson and Jan Wijbrans.

We are now accepting nominations for the next Barrow Award. We are hoping for a strong pool of nominees for The Metamorphic Studies Group 40th Anniversary in 2021.

Nominees do not have to be Members of the Mineralogical Society, Fellows of the Geological Society of London or nationals of Great Britain and Ireland. The award is open to a scientist at any stage of their career (early, mid or late).

Nominations for the 2020-2021 medal should be sent to the Chair of the Metamorphic Studies Group committee, to arrive not later than 31st October 2020.

Submissions should be compiled as a single package in pdf format, to include the nomination statement, CV of the candidate and the optional additional letters of support. The nomination package should be attached to an e-mail with a title which identifies the name of the award and the name of the nominee. The e-mail address to use is metamorphicstudiesgroup@gmail.com