The 3rd International Critical Metals Conference, organized by the Mineralogical Society’s Applied Mineralogy Group, was held at the Surgeons Hall venue, Edinburgh from 30th of April to the 2nd of May 2019.

Seventy scientists gathered in the late spring sunshine in Edinburgh to discuss Critical Metals. The organizers took an interesting approach to building the programme with speakers on three main themes: 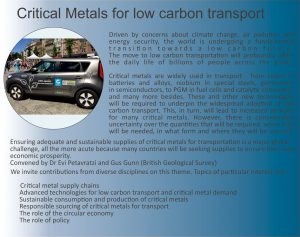 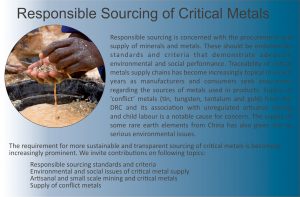 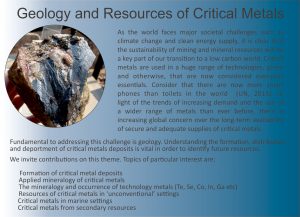 The third of these was perhaps the most familiar ground for mineral scientists, but the work presented in themes  1 and 2 was fascinating and the meeting gave an excellent opportunity for the broader community to meet, including representatives from NGOs etc., materials science, Geo-ethics, as well as the more usual (as far as MinSoc is concerned) mineralogy and exploration folks.

This unique blend of disciplines allowed the conference to take a holistic approach to some of the biggest questions facing critical metals: the role they will play in the decarbonisation of the future, where those resources will come from and how can they be exploited in a sustainable manner. Talking points on the nature of criticality and how it is a very subjective topic were evident as delegates from more than 15 countries were present. Our keynote speakers, David Merriman, Jacqui Murray, James McQuilken, Kathryn Goodenough, Paul Nex and our Early Career Researcher keynote Anouk Borst, provided excellent overviews and talking points on some of the current issues. The opportunity to speak to representatives from different parts of the critical metals supply chain was invaluable and based on the buzz at breaks and the conference dinner, networking abounded!

Highlights from the conference included significant discussion on battery raw materials and where those metals were going to be sourced. Discussion across geological surveys, governmental representatives were fruitful for all involved and great links were made between organisations which would not typically be present in the same room. Particular comments from delegates included the appreciation of the sustainable development talks in the middle of the conference where the message from people on the ground was conveyed to both end users and geologists.

Also below is a copy of the programme with links to those presentations where permission has been received from the authors to publish here.

A special issue of Mineralogical Magazine will appear in 2020 arising out of papers presented during the meeting and by authors who could not attend but who work in this area. Go to https://www.editorialmanager.com/minmag/default.aspx to submit your paper to the Critical Metals 2019 special issue. 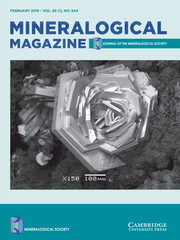 Butcher: The evaluation and development of lithium brine prospects: examples from the Altiplano Puna, South America

Lundhaug: How much do we know about material cycles? An application of the MinFuture framework

Danino-Perraud: A Material Flow Analysis of cobalt: observation on the evolution of the cobalt flows in the European Union from 2008 to 2017

Schmid: Why the European automotive industry struggles to secure its need for critical raw materials

Moore: Conflict and critical raw materials production: a tale of antimony production in the Balkans

Doyle: Environmental & Social Maturity as a new concept for self-assessment of best practice in a mining context

Caven: Building an ecosystem for change in the responsible sourcing of critical metals – The Impact Facility for Sustainable Mining Communities

Lusty: Deep-sea mining: A responsible source of critical metals or a step beyond the environmental limits of our planet?

Paul Nex (keynote): Have the Wheels Fallen off your “Hype Cycle”? A retrospective look at criticality: tantalum, rare earth elements and lithium

Siegfried: Scandium as an important critical metal in the quest for reducing carbon dioxide emissions in the 21st century

Gloaguen: Overview and assessment of the European lithium resources

Smith: Ion Adsorption Deposits: A comparison of deposits in Madagascar and China

Beard: Geomodels for REE and HFSE exploration in carbonatite and alkaline-silicate magmatic systems

Liang: Formation of selenium- and tellurium-containing nanoparticles during the growth of filamentous fungi

Finally, thanks to those who supported the meeting financially: