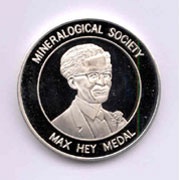 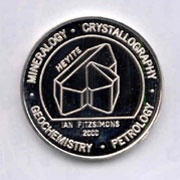 Nominations are sought from members of the Society for the award of this medal which was founded in 1993 and named in honour of the eminent British mineralogist Dr M.H. Hey (1904–1984). It has been established by the Council of the Mineralogical Society of Great Britain and Ireland and has the purpose:

‘To recognise existing and ongoing research of excellence carried out by young workers, within the fields of either Mineralogy, Crystallography, Petrology or Geochemistry. Evidence of excellence should be in the form of work published in highly-regarded, international scientific journals. In a change to the rules used in previous years, the nominated candidates do not necessarily need to be Members of the Mineralogical Society. On the closing date for nominations, candidates must be within 15 years of the award of their first degree, except where there has been a career break, detailed in the nomination, in which case the committee chair may agree to accept nominations from candidates for whom the first degree was awarded more than 15 years previously.’

Nominations should be supported by (i) a statement on the merits of the candidate; (ii) a summary curriculum vitae; and (iii) a list of published work.

(b) By completing the standard  form to which nominators, seconders and others may contribute. The aim is to reduce the amount of work required to make a nomination.

Nominations will remain on the table for three years, as long as the timing requirement is upheld.  Previous recipients of the award, Society Officers, members of Council and members of the Committee (at the time of nomination and adjudication) will not be eligible for the award.

Nominations are now being sought for the 2023 award.

Nominations for the 2023 medal should be sent to the Chair of the Awards Committee, at the Society’s office, to arrive not later than 15th April 2022. If not using the form mentioned above, submissions should be in the form of a single package in pdf format, to include the nomination papers, a 2–3 page CV of the candidate and the additional letters of support. The nomination package should be attached to an e-mail with a title which identifies the name of the award and the name of the nominee. The e-mail address to use is kevin@minersoc.org