The Metamorphic Studies Group is pleased to announce the second (2021) winner of the Barrow Award, to Prof. Roger Powell of the University of Melbourne 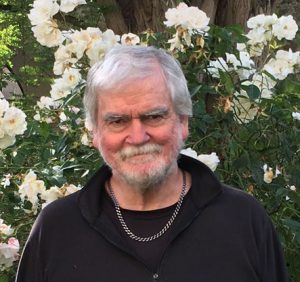 2021 is a notable year for The Metamorphic Studies Group, as it is celebrating its 40th anniversary. Therefore, it is highly appropriate that this year’s Barrow Award goes to Prof. Roger Powell, whose work over the last ~40 years has fundamentally changed the way we do research in metamorphic petrology. In particular, Roger has been instrumental in advancing quantitative metamorphic petrology through the development of the THERMOCALC software and the use of phase petrology to understand metamorphism. This is a recording of the Introduction and Award speeches by C. Mottram and D. White, respectively.

Roger is perhaps best known for his thermodynamic computational program THERMOCALC. The key contribution of Roger to the metamorphic community is through his development, together with Prof. Tim Holland, of an internally consistent database of thermodynamic data for metamorphic minerals and melts, along with software to allow evaluation of metamorphic conditions in natural rocks. Through his numerous workshops around the world promoting, explaining, testing and improving the database, activity models and software, he has been instrumental in educating a whole generation of petrologists. Roger had made sure the world is aware of the tools available to understand metamorphic processes and has worked tirelessly to improve and widen the scope of the software package.

Roger has shown an incredibly long-term vision in seeing the benefits of computational methods in petrology from as far back as the 1970s where the nucleus of THERMOCALC was first developed, through the 1990s with the emergence of calculated petrogenetic grids and calculated pseudosections, and into the 21st century and the common use of this approach and the development of geologically realistic model chemical systems. While the broader THERMOCALC endeavour has involved many people, it has been Roger that has stood at the core of this work.

Roger has done much more for the community than just his own central science: he has built a wide research network worldwide that has introduced many to the, often daunting, challenge of calculating and using quantitative phase diagrams. He has published a great number of papers including co-authors from all over the world, many of whom would visit Melbourne for research visits to learn from Roger. He has been a member of the editorial review board of the Journal of Metamorphic Geology for a record 35 years, including as editor from 2000 to 2012, and has taught numerous international short courses on many aspects of metamorphism. Importantly he has served as a supervisor or academic mentor to many, guiding and advising them on science, life and the finer aspects of wine. Many have gone on to highly successful careers and are part of the lively metamorphic community.

The 40th anniversary Metamorphic Studies Group Barrow Award is a fitting mark of our UK recognition of the substantial, innovative and absolutely fundamental contributions that Roger has made to our science and to thank Roger for the decades of service that he has committed to the worldwide metamorphic community.

The Barrow Award 2021 was judged by Aphrodite Indares, Chunjing Wei and Paddy O’Brien. Roger was nominated for the award by Richard White and his nomination was supported by Simon Harley and Richard Palin.

We are now accepting nominations for the next Barrow Award.

Nominees do not have to be Members of the Mineralogical Society, Fellows of the Geological Society of London or nationals of Great Britain and Ireland. The award is open to a scientist at any stage of their career (early, mid or late).

Nominations for the 2021-2022 medal should be sent to the Chair of the Metamorphic Studies Group committee, to arrive not later than 31st October 2021.

Submissions should be compiled as a single package in pdf format, to include the nomination statement, CV of the candidate and the optional additional letters of support. The nomination package should be attached to an e-mail with a title which identifies the name of the award and the name of the nominee. The e-mail address to use is metamorphicstudiesgroup@gmail.com