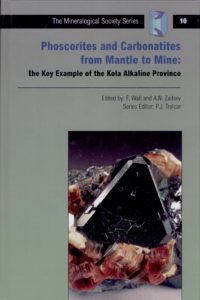 Phoscorites and Carbonatites from Mantle to Mine: the Key example of the Kola Alkaline Province. Edited by F.Wall and A.N. Zaitsev.

This book on the rocks of the Kola Peninsula, Russia, makes a major new contribution to our knowledge of one the worldís most extreme, and thus important concentrations of ultrabasic, alkaline rocks and carbonatites. Many of the carbonatites occur in association with apatite, magnetite, silicate rocks called phoscorites, which are key to understanding how carbonate-bearing magmas travel from the mantle to the crust and how they behave on cooling. Phoscorites are also of prime economic importance as sources of phosphate, iron ore, baddeleyite, copper and Platinum Group Elements (PGE). Fourteen chapters provide new data, discussions and interpretations by European and North American experts on Kola and include summaries of literature previously only available in Russian. 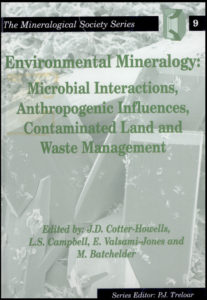 Mineralogists have always sought to understand the chemical and physical environment under which a particular mineral forms and to determine the arrangement of atoms within that mineral. The new field of Environmental Mineralogy asks the same questions in a different context and seeks to define the roles of minerals in natural ecosystems, together with understanding the preservation and restoration of such systems This book provides an up-to-date account of the state of this diverse subject area and will appeal to both senior undergraduate students and researchers alike.

Numbers 2-8 in the series can now be ordered directly from the publishers, Springer. Mineralogical Society members wishing to obtain a discount should log in at the Mineralogical Society homepage, where they will find a link to a page on the Springer site which offers the discounted prices on these titles.

1. Deformation processes in minerals ceramics and rocks
Edited by D. Barber and P. Meredith
(out of print)

8. Deformation-enhanced fluid transport in the Earth’s crust and mantle (1997)
Edited by M. Holness